If you enjoy small town contemporary romance with a touch of humor and a paranormal twist LIP SERVICE by Adele Downs might be the perfect book to add to your collection. This short novel has just the right amount of sexy and a cast of characters readers say they love. Available in both digital and print formats.

“What an amazing story! Adele Downs nailed it with a unique storyline and unforgettable characters. Jack is a serious hunk, more so because he’s honorable and steadfast. This enthralling read ensures you can’t stop turning the pages till you reach the end!” 5 Stars! ~Phoenix at Reading Alley

“This story was perfection. It was just right in every way possible. The characters were interesting, flawed just enough, yet smart and funny. The plot was unique, entertaining, and clever. The writing was witty, well-paced, and insightful. And the sensual scenes sizzled and snapped. But most of all, I like that they bested a recalcitrant ghost.” 5 Stars! ~Rockin’ and Reviewing

Some ghosts won’t take “yes” for an answer.

Jack Harris has loved Legs Anderson since they were kids. Now that he has her in his bed, he has no intention of letting her go. Aunt Ada has other ideas, even from the grave.

Orphaned at a young age, Legs Anderson owes her Aunt Ada everything. The stoic old lady raised her, and Ada’s warnings about men—and the Harris boys in particular—have stuck, even after her death. Of course, that could be because Ada stuck around, too.

Patience is not one of Jack Harris’s virtues, and he’s waited too long to start a life with the woman he’s loved since childhood instead of them just knocking boots. Now Ada is interfering from beyond the grave, haunting the old Victorian house she bequeathed to her niece and reinforcing Legs’s fears of commitment. But Jack won’t give up. No matter what trouble may follow, the house will be renovated, Ada will learn to let go, Legs will put her money where her mouth is…and then Jack’ll put his lips everywhere else.

Buy the Book on Amazon!

Buy the Book on Smashwords!

The roar of a Harley-Davidson motorcycle on Rachel’s block and the rev of a throttle in her driveway announced Jack’s arrival. Legs tried to appear nonchalant when he walked through the poolside gate, but the sight of his sun-streaked hair and tanned, muscular good looks nearly knocked her off her seat. She eased her sunglasses down the bridge of her nose to get a better look.

When he stepped into the pool area dressed in black jeans, black biker boots, and a white muscle shirt that framed his pumped-up shoulders and biceps, she caught her breath. Everyone in the group said “hey” and Rachel offered him a cold drink, but his focus had remained on her. He slid his sunglasses on top of his head and nodded in her direction.

Legs remembered his gaze meeting hers before his attention strayed to her gold and black bikini then savored every inch of her skin. An appreciative smirk curled his lips and desire flashed in his beautiful blue eyes. He took a long pull of the soft drink someone handed him and then set the can down on the patio table. He looked her way and said, “Want to go for a ride?”

The invitation came out like a dare. All eyes shifted to her, watching to see what she’d do. They all knew she wasn’t allowed to date Jack Harris. Taking a ride on his motorcycle might not have been the same thing, but there would be hell to pay if her aunt found out.

She stretched her arms over her head and offered a lazy smile. “I guess so.” Though she’d been as nervous and excited as a rabbit, she never let on. She stood and pulled on her shorts and shirt, slid her sandals over her feet, and made her way across the patio to him.

Her aunt’s spies might see her on the road, but she pushed that worry aside. Mere weeks remained before she’d move away to college and the subject would be moot. She’d be gone most of the next four years, and by the time she got back, Jack would probably be married with a couple of kids. Half the women in town had their eyes on him and his brothers.

The idea of Jack marrying someone else made her furious, and more determined than ever to enjoy this rare day alone with him.

His gaze tracked every step of her approach, as if memorizing the lines and planes of her face, learning the shape of her breasts, and tattooing the curves of her waist into his brain. When she reached his side, he smiled at her so intently she almost faltered. Her heartbeat raced when he took her hand. She barely heard her friends say good-bye as they exited the patio door.

His Harley was built in classic style—all black steel and leather with silver chrome, glinting majestically in the sunlight like a god. She ran her fingers over the warm plush seats.

“Ever been on a bike before?” he asked, watching her with eyes so blue she almost missed his question while she stared back.

She pulled an elastic band from her shorts pocket and tied her hair into a ponytail. “Uh. No.” Her hair swung with the shake of her head. He probably knew the answer, but she appreciated the benefit of his question. He hadn’t made her feel like a total geek.

He gave her a tutorial with simple instructions, including the demand that she hold on to him tight and not let go. No problem there. She resisted a fit of giggles, determined to act her age and accept responsibility for her own safety, as tenuous as that might be on the rear end of a motorcycle wearing shorts and sandals.

He slid his sunglasses into place and got on the bike, steadying it with his feet while she scooted in behind him. After shifting her weight to find her center of balance, she wrapped her arms tight around his chest. The solid feel of his body thrilled her beyond anything she’d imagined. He smelled fantastic too, like musk cologne, leather, and sweat tossed with August air and sunshine.

Leaning closer for support, she pressed her torso against his back and stifled a gasp at the sensations the friction created. If he never started the engine, and they simply sat together like this, it would have been enough.

“This is an unusual love story, but it works. The writing is imaginative, humorous and touching.” 5 Stars! ~CJ’s Book Corner

Love Is Like A Box Of Chocolates - Sweet Romance Anthology. "Catch Me" by Adele Downs included in the collection of 16 stories 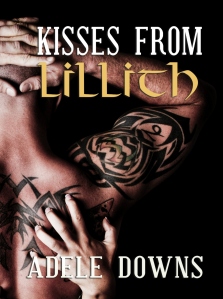 Adele’s Page at The Romance Reviews